Carstensen Contracting of Dell Rapids, SD was the low bidder on all three contracts for different segments of the 24 inch diameter pipeline between Beresford, SD and Sioux Center, IA. Construction is expected to be completed this fall on the western-most 11.2 miles. Pipe installation started in early June on the eastern-most 10 miles (photo above). Construction is expected to begin in September on the middle 12.6 miles, which includes the Big Sioux River crossing.

Welfl Construction of Yankton, SD started construction in early June on a radial collector well that is expected to produce 16 million gallons a day. The well is located along the banks of the Missouri River just north of the Vermillion-Newcastle Bridge at “Site B” (first photo below). 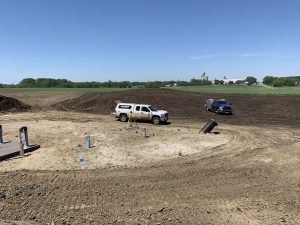