The source of water is a series of 11 wells — seven vertical and four angled — that tap into the Missouri: Elk Point Aquifer adjacent to the Missouri River.  The main wellfield is in an area known as Mulberry Point, just north of the Vermillion-Newcastle Bridge southwest of Vermillion, SD.  It is part of SD Department of Game, Fish & Park’s Frost Production Area.  There are three wells at Site A, three at Site C, three at Site D and two at Site E.  One or more wells will be built in the future at Site B, and possibly elsewhere, as demands require.  Most are a stone’s throw from the river bank.  Protecting them from erosion is a one mile bank stabilization system called a “modified stone toe revetment”.  This environmentally friendly approach to bank stabilization received the distinguished “Partners in Conservation Award” from the U.S. Secretary of the Interior in May 2009. Lewis & Clark also owns land a couple miles upstream for a possible secondary well field known as Site J, but it is not known when or if any wells will be drilled there.

There is no intake pipe pulling water directly from the river, so the result is a very high quality water that has been filtered by the sand and gravel.  For regulatory purposes the water is considered “ground water”, as opposed to “ground water under the influence of surface water”.  Water rights are provided through the State of SD.  Well contracts in chronological order:

The first well drilling contract was awarded to Layne Western of Omaha in June 2003 and substantial completion was reached in December 2003.  Final construction cost was $362,000.  This contract was for one angle well and is the only one drilled parallel to the river.  The other three subsequent angle wells were drilled perpendicular to the river.

The contract was awarded to Sargent Drilling of Nebraska in August 2005 and substantial completion was reached in November 2005.  Final construction cost was $58,650.  This contract was for one test well and six observation wells a couple miles upstream at Site J. Based on the testing results the engineers determined when compared to the Mulberry Point wells neither the water production nor the quality are as high.  It is unknown when or if production wells will be drilled at Site J.

The contract was awarded to Welfl Construction of Yankton, SD in September 2007 and substantial completion was reached in August 2008.  Final construction cost was just over $5.2 million.  This contract was for pump houses, vaults, piping and roads for the six wells at Sites C and D, as well as construction of one mile of revetment that protects the main well field from erosion.

The contract was awarded to Welfl Construction of Yankton, SD in April 2010 and substantial completion was reached in December 2011.  Final construction cost was $5.8 million.  This contract was for five vertical wells (three at Site A and two at Site E), as well as the associated pump houses, vaults, piping, standby generators and roads.  It also included equipping the six wells at Sites C & D with pumps, controls and standby generators.

A contract was awarded to Quinn Construction of Rapid City, SD in May 2017 to repair portions of the existing one mile of revetment that protects L&C’s well field from Missouri River erosion, as well as extend the revetment 2,100 feet.  Substantial completion was reached in December 2017.  Federal funds were used for the extension (just over $1.1 million) and reserve funds for the repairs ($490,342).

A contract was awarded to Welfl Construction of Yankton, SD in June 2018 for four vertical wells to replace four adjacent angle wells that were abandoned. Substantial completion for the last two wells was reached in November 2019. Final construction cost was just over $1.9 million. The angle wells were decreasing in production and efforts to rehabilitate them were unsuccessful. In addition, the maintenance and repair costs of the angle wells were increasing. It was never the plan of project engineers to construct angle wells, but they were recommended as part of a Value-Engineering Review led by the Bureau of Reclamation. Unfortunately, the Value-Engineering Review cost money instead of saving money. Federal funding was used for the replacement vertical wells, since in hindsight that is what should have been constructed.

A $10.3 million contract for a radial collector well at Site B was awarded to Welfl Construction of Yankton, SD in March 2020. Based on test pumping conducted in July 2021, the well is expected to produce a maximum of 22 MGD. Its original design was 16 MGD, but the increased capacity is due to the 10 lateral screens being extended a combined 600 feet (overall length increase of 34.3%), as well as the material around the screens being coarser than expected; allowing for the gaps in the screens to be widened to increase water flow. The substantial completion deadline is June 2022. 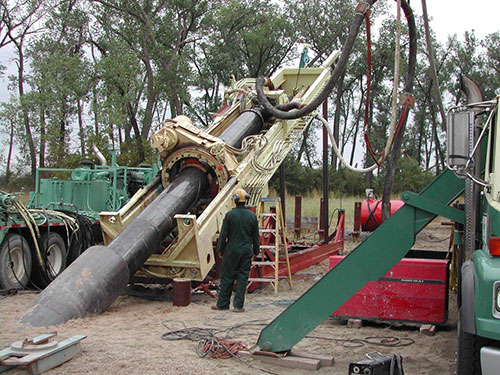